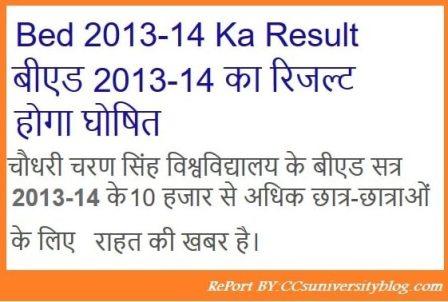 Check Details below
Approximately, 35,000 students were in wait and watch condition from last four years. They take admission in Bed session 2013-14 directly, court stay on the results, even CCSU admission 2022

Please fill your Email id in below box so that we can Email you results updates..

For 7,500 students in Sharanpur and Meerut zone, the Chaudhary Charan Singh University Bed 2013-14 results will declare within 6 weeks.

The result is ready, university waiting to receive court's official order copy. As the order receive result will declare within 24-48 hours.

Why students crazy for B. Ed course?

As the name specifies Bachelor of Education (B.Ed.) course is mainly in the field of education and its related fields.

Applicants for this course insist on education and its finite mobility. Applicants can make an estimate of working in universities / colleges in their chosen specialization.


Is B.Ed. a degree or diploma?

The duration of the course is two years from the 2015-16 sessions according to the Regulations of NCTE, 2014.

A bachelor of education degree does not depend on the current of its specialization. A degree in B.Ed. has become mandatory these days if you are assuming teaching as a profession. Few other qualities of course, given below
Is This Education course worth?

There is a great lack of trained teachers in all schools in our country. The search for training, teachers will never be less. Therefore, a grade of B. Ed guarantees good learning functions that can be monetary and emotionally satisfying.

What the case is?

In 2013-14, here in several colleges B.Ed. seats vacant in thousands, students don't show interest in B.Ed. Course or Bachelor of Education, B.Ed. colleges in UP request to state administration to fill the vacant seats.

Some colleges file Writ in High court to allow fills the seats.

And, the problem starts. Someone challenge the state government and colleges in High court to declare all admissions UNFAIR AFTER 16 July, 2013.

Students again request in HC, in the welfare of students High Court permission to Universities/colleges only for examination with clearly in order that the universities will not declare BED result 2013-14, till next order.

Later, students challenge HC decision in SC, And on 10 September Supreme Court declares all Bed admissions Invalid /UNFAIR and deny to reconsideration of an old order.


Lose of studentsYes!! Of course
They were waiting for the last four years for results. Believe me; some students are now over age for teacher job eligibility.

The students aren't taking admission in bed later; because of they were assured about the result declaration.
Keep it in mind court order to declare result for the students who appeared in CET conducted by the Gorakhpur University. Stay remain unchanged for the other students.