CCS University banned Mobile on campus and colleges (In Class)

The use of mobiles on campus is banned for students studying in state universities and degree colleges.

Mobile will be confiscated if caught using mobile or WhatsApp while studying in class or campus.  Latest Updated on Thursday 17, 2019 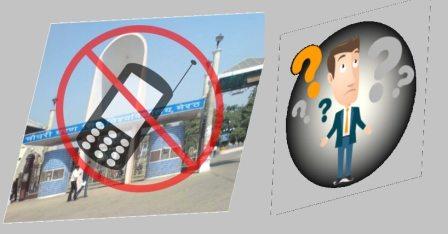 Where the students have accepted the order of the Directorate as correct, CCS University Vice Chancellor Prof. NK Taneja has also described it as the right step.


The Study is more important than the cell phone

Mobile has become an important part of routine today. Without mobiles, many young people have started thinking of themselves as incomplete. Soon, CCS University Private Form 2020 circular will issue, off-course it's time to concentrate on study.

Want to keep mobile with you at all times. Mobile is an integral part of modern lifestyle; it is true that because of mobile we can convey our feelings to everyone in a quick way.

It also has many positive aspects, which people are taking advantage of, but there are many negative things of mobile as well.

Especially for the youth when it is time to read them…

• They talk for hours on mobile unnecessarily.
• Spend time on social media. As far as university and college are concerned, the youth studying here are not far from this trend.

“More than their syllabus, students keep in touch with mobile. The Directorate of Higher Education has taken a step in commendable and student interest by banning mobiles in state universities and colleges.

I have not received its order yet. Will talk to a higher education officer in this regard. Whatever is the order of the government, it is our responsibility to follow it 100 percent. Mobile should not be carried in class.


There is a need to read very seriously in class.

Students are not able to remain focused by carrying mobiles. Time and again the students' attention turns to mobile.

Therefore meditation is impaired by studies. This is a very good decision. It also needs to be considered seriously by all colleges and students. ”- Prof. NK Taneja, Vice Chancellor, Ch. Charan Singh University

Even, by taking four steps ahead, The DN Degree College has banned the use of mobiles in campus following instructions from the Directorate of Higher Education.

Now students in the college campus - students will not be able to play mobile. He can keep a mobile with him, but will keep a switch off at the time of entering the premises.

The college has also constituted a committee to monitor mobile. On Wednesday, there was a meeting of the Board of Proctors to stop the use of mobile in the college. It was decided to strictly prohibit mobiles.

Principal Dr. BS Yadav has formed a team of six people. Students who will keep an eye on whether a student is using mobile inside the college. Along with this, all cameras installed in the college will also be monitored.

Under the supervision of Dean of Student Welfare Dr. SK Aggarwal and Chief Professor Dr. Sudhir Kumar, the entire team will prepare the report every day.

• If a student is found using the mobile for the first time, his mobile will be confiscated. Mobile will be returned by calling the guardian.

• Notice will be given to the student concerned for the second time.
Mobile Alternative Computer Lab

DN College has provided internet in computer labs for students and students with mobile and internet on campus.

The college has 50- 50 computers. Students can do internet searches in the lab or for check CCSU Result Status by click on this link https://www.ccsuniversityblog.com/2017/04/ccs-university-results-forget-roll.html

However, social media cannot be operated on the computer's internet.

A report has been prepared regarding the number of students using mobile in DN College.

And the report said that 60 percent students and 65 percent students come to the college with mobile. Students say that parents are worried about them being outside, so they get convinced by contacting them due to being mobile.